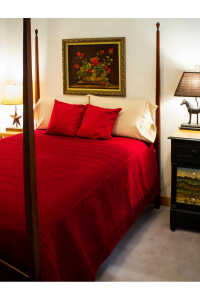 Persecution is defined as “hostility or ill treatment because of religious or political beliefs.” My Wednesday blogs focus on how Kingdom (i.e., faith-based) persecution is impacting Christian business owners and leaders in our day.

Persecution manifests itself in overt actions that condemn, curtail, deny and/or blatantly punish the free exercise and expression of Faith. But what if the hostility or ill treatment inherent in persecution is also more subtle?

What if some forms of persecution strategically invade the consciousness of their faith-based victims? By seducing them into desiring the very ill treatment designed to destroy them?

Like a wolf in sheep’s clothing. Even in the bedroom.

This past month, C12 — North America’s fastest growing peer advisory group for Christian business owners — dealt with the sensitive issue of pornography in its monthly meetings. Why tackle such a private issue in a forum for business leaders?

Pastors are not immune. Not by a longshot. In a separate study, Barna reported that 57% of pastors admitted to current or past struggles with pornography, compared to 64% of youth pastors.  https://www1.cbn.com/cbnnews/us/2016/January/Pastors-and-Porn-The-Struggle-is-Real

But like Shakespeare’s reference to the rose — still smelling sweet, by any other name — could the stench of pornography (by another name) also be choking women? Even Christian women?

The answer is a resounding YES!

Enter the sensual, racy, romance novel — a 1.5 billion-dollar-a-year industry by 2012. Harlequin novels followed a pattern of one hero, one heroine and an implied committed relaionship by the end.   https://www.newyorker.com/business/currency/what-happened-to-the-harlequin-romance

Laurie Kahn, producer of Love Between the Covers (a documentary) states, “More than 70 million people in the USA alone read at least one romance novel per year, and most of them read many more.”   Which, when correlated with 2015 US Census numbers, suggests that 70 million American women may be “covertly consuming literary pornography” annually.  https://www.crisismagazine.com/2016/romance-porn-women-addicted-think

Is it just innocent fun? The answer is a resounding NO!

They have published a God-honoring, biblically-sound resource entitled, Pulling Back the Shades – Erotica, Intimacy and the Longings of a Woman’s Heart.  https://www.amazon.com/Pulling-Back-Shades-Intimacy-Longings/dp/080241088X

How are female Christian business leaders (and those they influence) impacted?

How can they/we exercise Kingdom POWER to gain victory?

Catch my Friday blog. But meanwhile…