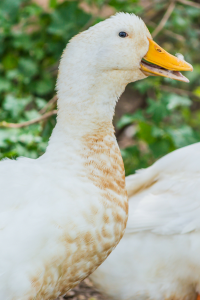 Does anyone in our country not know the likable — albeit, somewhat feisty — mascot of AFLAC, the supplemental insurance giant? You know… the Duck?

He’s #3 in U.S. brand recognition. Who’s #1? Yep… Geico’s Gecko.  🙂  What’s interesting is how much money these companies pay for that privilege.

According to Daniel Amos, Aflac’s CEO (quoting an outside advertising source), Geico spends $900 million for its #1 spot. And Aflac? $95 million. Tells you what that Duck is worth. http://www.ledger-enquirer.com/news/local/article29322955.html

Aflac’s success is impressive, with revenues of $29 billion and 10,000+ employees. Although a dominant U.S. brand, 75% of Aflac’s business is in Japan. Where it insures 25% of Japan’s population and 95% of the companies on the Tokyo Stock Exchange.  https://www.faithandleadership.com/paul-s-amos-not-who-we-are

Aflac’s real treasure is far more valuable than its well-known spokes-duck. The fact that it was founded on (and still operates by) Christian principles.

Such commitment across generations requires intentionality.

Daniel, the only child of one of the company’s three founding brothers, became CEO in 1990. His son, Paul Amos, II (currently President/COO) takes over leadership when Daniel retires. The faith that has permeated this family’s worldview has been woven into the corporate culture for decades.   http://fortune.com/2014/11/11/7-ceos-with-notably-devout-religious-beliefs/

For a fascinating glimpse at how Christian principles saturate the culture, I recommend Paul’s interview in Faith and Leadership — online magazine of Leadership Education at Duke Divinity School. https://www.faithandleadership.com/paul-s-amos-not-who-we-are

Here are a few of Paul’s perspectives on workplace Faith:

When we’re doing the right things and we’re also trying to teach our people how to do the right things, it’s not expressly in your face, but it is about doing the things that we think are going to generate the best return for our shareholders… [and] our policyholders, and the best way to take care of people.”

The Aflac Way, given to every employee, outlines the company’s guiding principles. Almost all are based on Scriptures (not overtly referenced). Like, “Everyone is important… everyone is treated equally.” (From James 2:1-9)

Aflac’s principles were severely tested when a devastating tsunami hit Japan. Corporate immediately donated $1.2 million to the Red Cross. Employees raised another $300,000 for the Japanese people. Employees staffed offices for days on end to fulfill their promise to “be there” for policyholders and pay them in timely ways.

And when Gilbert Gottfried (the U.S. voice of the Aflac duck) made inappropriate jokes through his Twitter account, he was fired within 15 minutes. Because, Paul said (referencing Ephesians 4:29), “This is not who we are.”  https://www.faithandleadership.com/paul-s-amos-not-who-we-are

Maybe that’s why Aflac has made Fortune’s “100 Best Companies to Work For” every year for the last 20 years.  https://www.greatplacetowork.com/best-workplaces/100-best/2018

Where would you give Aflac two thumbs up? Or maybe…  two wings?   🙂