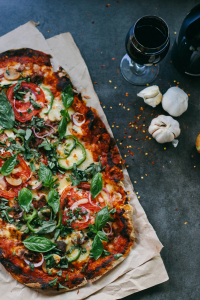 A slice of Mayberry… right?

Maybe. At least until a small, family-owned pizza restaurant became embroiled in the national debate over religious and civil rights. And, as one news story put it, “touched off a national media firestorm.”  https://www.southbendtribune.com/news/business/walkerton-pizzeria-once-at-center-of-national-controversy-has-now/article_83b23989-40ef-554f-b4ab-d4657cf0a150.html

Flashback to April 2015. Owners Kevin and Crystal O’Connor — a father/daughter team — might have remained relatively anonymous, but for… the signing of the Religious Freedom Restoration Act (RFRA) by then-Governor Mike Pence. Or the reporter for the ABC-News South Bend affiliate who asked the question that led to the answer that threw gasoline on that spark.

Or the timing. Although many other states had passed similar legislation, Indiana’s RFRA was just becoming law. So it made headlines. Supporters argued it protected religious rights of business owners. Critics feared it would facilitate LGBT discrimination.

Enter the O’Connors… and the interview that changed their lives.

Crystal said the pizzeria was a “Christian establishment.” They would gladly serve gay or lesbian customers. But if a gay couple wanted them to provide pizzas for a same-sex wedding, they would have to say ‘no.’ Because of their deeply-held religious beliefs about marriage.

“Who’s going to Walkerton with me to burn down Memories Pizza.”

The account reportedly belonged to a high school coach 40 miles away, who was subsequently suspended without pay pending an investigation.   http://abcnews.go.com/Business/memories-pizza-indiana-thousands-donations-cater-gay-wedding/story?id=30064109

The O’Connors closed temporarily, for safety’s sake. “I don’t know if we will re-open, or if we can, if it’s safe to re-open,” Crystal said in an interview with TheBlaze.com. “We’re in hiding basically, staying in the house.”   http://abcnews.go.com/Business/memories-pizza-indiana-thousands-donations-cater-gay-wedding/story?id=30064109

Memories Pizza did reopen. Thanks, in part, to funds raised through a GoFundMe page created for the O’Connors by Lawrence Jones, a contributor to a show on Glenn Beck’s TheBlaze. “This is us as America,’ Jones told ABC News. “… our hope is to raise… money, to give them every penny so they can survive.”   http://abcnews.go.com/Business/memories-pizza-indiana-thousands-donations-cater-gay-wedding/story?id=30064109

Three years later, Memories Pizza is now a memory. Local business owners are tight-lipped about it. Some suggest the O’Connors just wanted to retire.

They vowed to donate a portion of the $840,000+ raised through crowdfunding to help other business owners in their shoes. Like Washington florist Barronelle Stutzman, whose legal case to continue her business is ongoing.   https://www.christianpost.com/news/memories-pizza-where-christian-owners-got-death-threats-for-not-catering-gay-weddings-closes-223357/

Kevin isn’t sorry for what was said, but he regrets the controversy it brought to his town… “good people who didn’t deserve the… negative attention they are getting because of this.”    https://www.christianpost.com/news/memories-pizza-where-christian-owners-got-death-threats-for-not-catering-gay-weddings-closes-223357/

Is it possible today for Christians to avoid negative attention when standing by their faith?

If so, how? If not, why not? And what can/should they/we do about it?