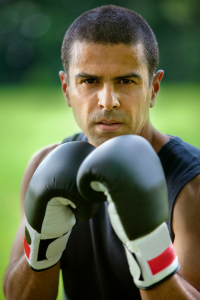 How does a self-proclaimed thug become a born-again evangelist and successful entrepreneur? Only by the Amazing Grace of God!

Born in 1949. Grew up in Houston’s Fifth Ward district. Dropped out of school in the ninth grade and ran with street gangs… until he joined the Job Corps in 1965. Looking for a job… any job. Connected with a boxing trainer who saw his street-wise fighting skills and encouraged him to apply them to the ring.

Named to the U.S. Olympic boxing team for the 1968 Olympics in Mexico City. Won the coveted gold medal in the heavyweight championship division. What could stop him from turning pro? Nothing. So he did.  https://www.biography.com/people/george-foreman-9298881

Sound familiar? Wasn’t there a hit movie series with a similar theme?  🙂  Except George’s rise was played out in real life.

George won his first 40 professional fights before confronting heavyweight champion “Smokin'” Joe Frazier in 1973. A decided underdog, George won the crown… then lost it in 1974 to Muhammad Ali. His quest for another title shot was derailed with a loss to Jimmy Young in 1977.

But this loss turned into his greatest Gain. Exhausted and dehydrated after the fight, George had a religious awakening… described in God In My Corner: A Spiritual Memoir of George Foreman.”   https://www.goodreads.com/book/show/1021188.God_In_My_Corner

George spoke of a near-death experience — being in a hellish, frightening place of nothingness and despair. He began to plead for God’s help and sensed God asking him to change his life and ways. He felt a hand pull him out. George retired from boxing and became an ordained, born-again Christian minister… preaching at the Church of the Lord Jesus Christ in Houston.  https://en.wikipedia.org/wiki/George_Foreman

Ten years later, at age 38, George sought a comeback. Clad in the same red trunks he wore during his bout against Ali, the 45-year-old George won… becoming the oldest heavyweight champion in history.  https://www.biography.com/people/george-foreman-9298881

When inducted into the International Boxing Hall of Fame in 2003, George’s entrepreneurial success had overshadowed his boxing career. Reinvented (from bad guy to smiling, likeable guy), George became a sought-after pitchman for numerous products — e.g., McDonald’s, Nike, Meineke… and the George Foreman Grill that has earned him hundreds of millions of dollars.

In his book, Knockout Entrepreneur, George exhorts business leaders to… be mentors and givers in a world that often reflects the opposite… value integrity and generosity over title and possessions… and seek wisdom over wealth, because the greatest ROI is found in faith, family, and community.  https://www.christianbook.com/knockout-entrepreneur-ebook-george-foreman/9781418577414/pd/5256EB#CBD-PD-Publisher-Description

Managing an economic empire, George still spends weekends preaching, teaching Sunday School and ministering to children at the Christian Youth Center he founded in Houston over 30 years ago.  http://fortune.com/2015/03/06/george-foreman/

George describes himself as a “traveling evangelist.”  http://www.georgeforeman.com/did_you_know.  Does this hold true in conversations with his co-stars — William Shatner, Terry Bradshaw and Henry Winkler — on the new reality travel show, Better Late Than Never… ???  🙂   https://en.wikipedia.org/wiki/Better_Late_Than_Never_(TV_series)

How would you coach George to capitalize on his platform of influence for Christ?