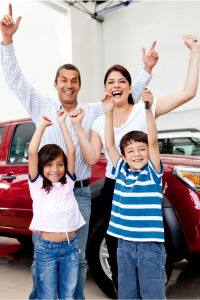 Buying a car is just about my least favorite thing to do. Can anyone relate?

I have often left that transaction feeling deceived, manipulated and/or just plain robbed. With too much of my hard-earned money left “on the table.” Because I wasn’t informed, wise or adept enough to find a true “win-win” outcome.

I hate feeling like I’m left holding the short end of the stick. How about you?

I just discovered a car dealer I would be inclined to trust. Roger Burdick. Not that I will ever actually do business with him. He and his family own Driver’s Village — New York State’s largest automotive megacenter, located in Syracuse.

But maybe that’s enough. Here’s what I learned…

Driver’s Village is comprised of 21 new car and truck franchises and a Used Car Warehouse. Imagine a 90-acre mall property completely filled with whatever type of vehicle you might want.

Roger, Owner/CEO, has been widely recognized for his automotive expertise. Winner of the Central New York Sales & Marketing Executives Crystal Ball Award. Twice nominated as TIME Magazine Quality Dealer of the Year. Founder of the Syracuse Auto Show Charity Preview, which has succeeded in raising (so far) over $2 million for local charities.

Driver’s Village is also the only automobile dealership voted as one of Central New York’s Best Places to Work. Why? Roger might say it’s because, in his quest to built a world-class organization, he shaped the corporate culture around the core values of Respect, Communication, Integrity and Innovation.

Operating at the highest levels of honesty and Integrity, as a company employees and customers can trust. Innovation a major focus for the company’s 500 employees, to enhance customers’ buying and servicing experiences.

He’s been married twice… to the same woman. Once, while still leading a decidedly un-Christian life… ending in divorce. The second (and final) time, after he recommitted his life to Jesus.

As a Bible-believing Baptist, Roger integrated his faith into his business. How many car dealerships do you know that are closed on Sundays? Roger’s is.

And he makes no secret of his faith. He believes that’s what draws religious Christians to Driver’s Village — as customers and as employees.

Then there are the eight part-time chaplains — 6 men and 2 women — who roam the 90-acre campus offering employees friendship and advice. And, if asked, the good news about Jesus.

So I ask again… Would you trust this car dealer?  🙂