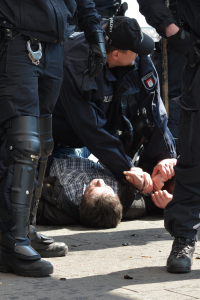 This post about Kingdom Persecution is not technically about Christian business owners. It is about CEO’s of another sort — police chiefs, sheriffs, fire chiefs and their departments.

And it’s about their growing interest in a service Christian business owners have long revered: Corporate (or in this case, law enforcement) chaplains.

A growing number are investing in professional chaplain services to assist first responders on the beat and on the street. To help the responders and victims of crime / trauma.

In 2015, law enforcement chaplaincy gained such popularity that the Freedom From Religion Foundation (FFRF) stepped in to oppose it.

According to First Liberty — in its 2017 edition of Undeniable: The Survey of Hostility to Religion in America (page 111) — FFRF attacked law enforcement chaplaincy programs in fifteen cities in 2015.

Opposing use of chaplains to counsel employees, their families and crime victims. Also opposing their assistance with other police activities, including death notices.

One police chief’s motivation? Bring faith into the organization to help officers and their families cope with the unique stress inherent in this high-risk job.

FFRF highlighted its opposition to chaplaincy at the Orlando (Fla.) Police Department.

FFRF objected to program costs, including dues and conference fees paid to the International Conference of Police Chaplains (ICPC). And their contention that all chaplains appeared to be Christian pastors, who received a monthly stipend of $150.

How (and why) did the International Conference begin?

In February 1973, three IRS agents died in a tragic auto accident late one evening. Death notifications had to be made to families in cities outside of Washington DC. One chaplain — Joseph Dooley — was extremely frustrated he couldn’t readily find or contact other law enforcement chaplains for assistance.

He decided to do something about it.

His letter went to 175 police association presidents, police chiefs in major cities, and law enforcement chaplains. He envisioned a national directory of chaplains, a clearinghouse of pertinent info, and mutual fellowship. The response was immediate… and ICPC was born.

Would you rather be with or without a chaplain?

What value or red flags, if any, do you see in law enforcement chaplaincy?

This blog may have raised questions for you. If you’d like to connect, engage, or get further help from me, you can… EMAIL me at [email protected]ny.com; CALL me at 863-446-1660; or request a complimentary initial CONSULT with me at https://calendly.com/diana-furr.