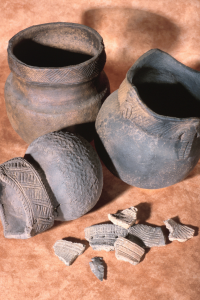 Not today’s pot, legalized in thirty states and the District of Columbia. A different kind of pot. In a far different place.

Time travel back to the third century. The pot-makers were two sisters in Seville, Spain. Justa and Rufina. Business owners who specialized in beautiful, hand-crafted clay pots.

Perhaps it is no surprise that, today, they are the patron saints of potters?

As was customary in their day, the sisters sold their pottery from outdoor booths in their village. Like an ancient craft fair or flea market.

The sisters refused. Why?

Because Justa and Rufina had become Christians. After hearing about Jesus from some missionaries. And they sought to be devout followers of Jesus… even in the marketplace.   http://saintsresource.com/justa-and-rufina/

But they were not willilng to use their creative talents to tacitly support the worship of false gods.

The locals went ballistic. Breaking all of their pots and dishes. Justa and Rufina apparently retaliated by smashing an image of Venus.  https://en.wikipedia.org/wiki/Justa_and_Rufina

They were brought before the governor, Diogenianus. Accounts differ as to what happened next.

One account claims the governor asked them to give up their faith. They refused, landing them in jail. The governor gave them one last chance. They refused again. He ordered Rufina to be thrown to the lions, but they refused to attack her.  http://saintsresource.com/justa-and-rufina/

“My God sent His angel and He shut the mouths of the lions. They have not hurt me, because I was found innocent in His sight.”  (Daniel 6:22)

Another account asserts that the governor ordered them to be stretched on the rack. Where Justa died. Rufina was strangled. Both bodies were then burned.   https://www.conservativereview.com/news/two-early-christian-martyrs-offer-a-stark-insight-into-bakethecake/

Whichever story is true — maybe they both are — Justa and Rufina ended up dead. Two Christian businesswomen who grabbed hold of their deeply-held religious convictions and wouldn’t let go…

… becoming martyrs as a result.

Thankfully, lions and racks fell out of favor long ago as interrogation or law enforcement tools. At least in this country. Which is why today’s Christian business owners need not fear a similar martyrdom fate like Justa and Rufina.

But how do the principles for which Justa and Rufina lost their lives still apply?

How might their testimony encourage and embolden Christian business owners today?