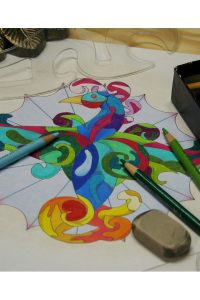 Here’s another amazing success story about a business founded (and owned) by devout Christians — Hobby Lobby.

In 1970, David and Barbara Green took out a $600 loan to begin making miniature picture frames out of their home. Two years later, the fledgling enterprise opened a 300-square-foot store in Oklahoma City, and Hobby Lobby was born. Today, with more than 750 stores, Hobby Lobby is the largest privately owned arts-and-crafts retailer in the world with approximately 32,000 employees and operating in forty-seven states.  https://www.hobbylobby.com/about-us/our-story

Imagine for a moment their sphere of influence for Christ: 32,000 employees (and their families). 750 stores operating in 47 states — the customers who buy their goods, the people who shop without buying, the suppliers who stock their shelves.

I can’t help but believe Hobby Lobby’s business success and its vast geographic reach has been a direct result of their declaration and fulfillment of God-honoring corporate core values and business practices:

Honoring the Lord in all we do by operating the company in a manner consistent with Biblical principles. Offering our customers exceptional selection and value. Serving our employees and their families by establishing a work environment and company policies that build character, strengthen individuals, and nurture families. Providing a return on the family’s investment, sharing the Lord’s blessings with our employees, and investing in our community.  https://www.hobbylobby.com/about-us/our-story

As one measure of gratitude, Hobby Lobby substantially supports Christian charities and organizations selected by the Green family, including (but not limited to) One Hope, Every Tribe Every Nation, and the Museum of The Bible. The company also gives a 10 percent in-store discount to churches, schools, and national charitable organizations.  https://www.hobbylobby.com/about-us/donations-ministry

So when, where and how did this company come up against the shifting culture? In 2012, when David Green took a public stance against the Patient Protection and Affordable Care Act (“Obamacare”), citing its inclusion of a provision mandating that companies provide access to the morning-after pill.

“These abortion-causing drugs go against our faith,” said David Green, founder and chief executive office of Hobby Lobby Stores, Inc. “We simply cannot abandon our religious beliefs to comply with this mandate.”   http://articles.chicagotribune.com/2012-09-13/lifestyle/sns-rt-us-usa-health-hobby-lobbybre88c0uc-20120913_1_hobby-lobby-healthcare-mandate-health-mandate

Wikipedia summarizes the sequence of events, as follows:

In September 2012, Hobby Lobby filed a lawsuit against the United States, arguing that the Free Exercise Clause of the First Amendment to the U.S. Constitution and the Religious Freedom Restoration Act serve to protect their religious beliefs, and accordingly bars the application of the contraceptive mandate to them.

The U.S. Supreme Court rejected the company’s application for an injunction, prompting the firm to sue the federal government on behalf of Hobby Lobby and other companies that have religious convictions against abortions. On July 19, 2013, US District Judge granted the company a temporary exemption from the mandate.

In contrast, on January 28, 2014, the Center for Inquiry filed an amicus (friend-of-the-court) brief with the Supreme Court, arguing that granting Hobby Lobby such an exclusion would violate the Establishment Clause, also part of the First Amendment, which states that “Congress shall make no law respecting an establishment of religion.”   https://en.wikipedia.org/wiki/Hobby_Lobby

Tune in Wednesday for the rest of this story… and its precedent-setting implications. Meanwhile…

Should a business owner be forced to comply with a government mandate that violates his or her deeply-held religious convictions?