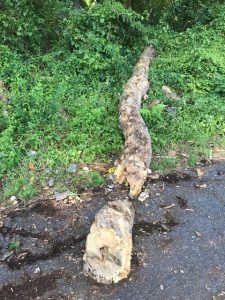 Wow, Lord… A lot can happen in seven seconds.

It’s a very short time, but it can make ALL the difference.

I found that out the other day when we were riding our bikes along beautiful Bohannon Road. Eleven miles, just over one hour… with lots of shade and no traffic at all.

My first 7-Second Difference was what I call “A Sighting.” I glanced up at a particular moment (thanks to You) and saw two large deer galloping across an open field to our right! They had nowhere to hide, so they just ran… leaping as they went.

It’s unusual to see such a thing… at least, for me. So I watched them, even as I pedaled. For… yes, about 7 seconds. I knew it was a special Gift from You, Lord. It was breathtaking!   🙂

My next 7-Second Difference happened just a few minutes later. Another special Gift from You. How could I call it anything other than what it was?

We pedaled around a corner… and heard a loud CRASH behind us. Was it a gunshot at close range? I had no clue… until we turned around awhile later for our return trip.

That’s when we saw it: The massive dead tree that had fallen onto the roadway. Without warning.

Right where we had been riding.

I clocked it. I had to know. We had missed its impact by just 7 seconds. Those few seconds made all the difference in whether or not I would be here now, writing this post.

I couldn’t help but consider everything that had led up to our being exactly where we were when that tree fell. How we had started later than usual, from a different place than usual. All of it leading up to those precious 7 seconds of both the Sighting and the Saving.

And that got me thinking. It’s so true… isn’t it, Lord? A LOT can happen in 7 seconds. A very short time that can change everything.

Like the 7 seconds it takes to get behind the wheel of a car, drunk, and turn the key in the ignition.

… or the 7 seconds it takes to tell a child “You’re worthless,” or a coworker “You’re a loser.”

… or the 7 seconds it takes to compound a lie that shouldn’t have been told in the first place.

But it works the opposite way, too… doesn’t it, Lord?

Like the 7 seconds it takes to keep a promise instead of breaking it.

… or the 7 seconds it takes to say “I love you” with the strength of decision (not just feeling).

… or the 7 seconds it takes to say, “Yes, Lord”… and become Yours forever.

So many examples! I could write all day! So few seconds, Lord… making such a great difference!!!

For now, let me just say “Thank You, Lord, for guiding our path so that tree would miss us!”