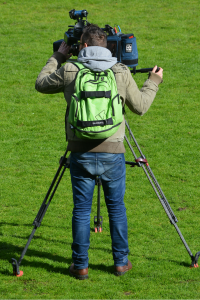 How many companies do you know that “exist to glorify God”? You probably would never have heard of this one, Telescope Media Group, had it not been for a law threatening their very existence.

Carl and Angel Larsen love telling stories. They get a lot of practice, with eight children. 🙂  Also, through their business, producing top-quality media. Say “Cheese”… 🙂

Their website quotes John Piper’s Dangerous Duty of Delight, defining a telescope’s function: “A telescope magnifies by making gigantic things (like stars), which look tiny, appear more as they really are.” Carl and Angel, as much as it depends on them, want to magnify Christ like a telescope — to make God look more like He really is in their lives, business and actions.  https://telescopemediagroup.net/

Except, in this Land of the Free, they are not free to do so in the way the Lord is leading them.

The Larsens felt called to start telling stories celebrating a biblical understanding of marriage. But a speech-coercing Minnesota law states that if they tell stories about marriage between one man and one woman, they must also tell stories about same-sex marriage.    http://www.breakingchristiannews.com/articles/display_art.html?ID=22750

Note the word MUST. If they decline to do so, the Larsens face fines of up to $25,000 and 90 days in jail. Because of this law, called the Minnesota Human Rights Act. Maybe Minnesota doesn’t consider Christians to be humans having rights, too?

The Larsens saw only three options, none of which were desirable. 1) Tell marriage stories that violate their deeply-held religious convictions. 2) Violate the law and suffer the consequences. 3) Censor themselves from making any films about marriage.

Until the Lord showed them a fourth option.

The Larsens took a stand. They challenged the state law. With the help of the Alliance Defending Freedom (ADF), a public-interest lawfirm representing them free-of-charge. Think about it: Isn’t striking down such a law in the public’s interest in this country?

Where have I heard it said?

“We hold these truths to be self-evident. that all men are created equal, that they are endowed by their Creator with certain inalienable rights, that among these are Life, Liberty and the pursuit of Happiness.” Oh, right… the U.S. Declaration of Independence, 1776.

“Congress shall make no law respecting an establishment of religion, or prohibiting the free exercise thereof...”   Amendment I of the U.S. Constitution, 1789.

The Larsens filed a federal lawsuit challenging the constitutionality of the Minnesota law. And, as Angel puts it, “have received a staggering amount of messages wishing death, disease, and poverty on us, our family, and even some of our closest associates all because we challenged the idea that the government shouldn’t have the power to silence or threaten anyone for not promoting all messages.”    http://www.foxnews.com/opinion/2017/10/20/christian-videographer-lets-live-together-in-peace-instead-silencing-those-with-whom-disagree.html

Chief U.S. District Judge John Tunheim in Minneapolis apparently didn’t see the relevance of these foundations. He dismissed the Larsen’s case. But the struggle is far from over. They are appealing.

If the government can control the speech of Christians… who is next?

This blog may have raised questions for you. If you’d like to connect, engage, or get further help from me, you can…  EMAIL me at [email protected]nsofdestiny.com; CALL me at 863-446-1660; or request a complimentary initial CONSULT with me at https://calendly.com/diana-furr.