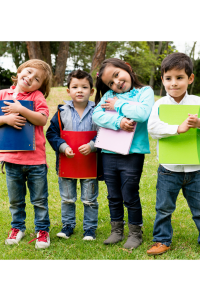 Do any of us remember what we were taught in kindergarten? Young parents at least know what their children are being taught now. If they’re paying attention, that is.

Maybe some of it is more rattling than reassuring… ?!

Fifteen years ago, Robert Fulghum turned a simple concept into a national bestseller: All I Really Need to Know I Learned in Kindergarten. Here’s just some of Robert’s childhood wisdom…

1. Share everything. 2. Play fair. 3. Don’t hit people. 4. Put things back where you found them. 5: Clean up your own mess. AND When you go out into the world, watch out for traffic, hold hands, and stick together. AND Sticks and stones may break our bones, but words will break our hearts.   https://www.goodreads.com/work/quotes/2399046-all-i-really-need-to-know-i-learned-in-kindergarten?page=1

If only national leaders we hear so often these days — on both sides of the aisle — took these to heart!

Political rhetoric has reached a level of ferocity in the last few days. Ferocity I have not heard before. Ferocity that points to the heart of why these Wednesday blogs about Kingdom PERSECUTION matter.

Because what kind of rhetoric (and the responses it provokes) lead people from polite disagreement to empassioned persecution of those with whom we disagree? How does it start? Where does it end?

On Sunday, Congresswoman Maxine Waters (D-CA) issued this call to her supporters via MSNBC: “If you see anybody from [President Trump’s] Cabinet in a restaurant, in a department store, at a gasoline station, you get out and you create a crowd and you push back on them, and you tell them they’re not welcome anymore, anywhere.”   https://www.nationalreview.com/2018/06/maxine-waters-trump-protests-wheres-the-line/

But is anyone listening? Waters herself remains defiant. Unapologetic. Claiming she never called for anyone to be harmed.  https://www.cnn.com/2018/06/25/politics/maxine-waters-trump-response/index.html

But words matter… don’t they? And what does the verb “harass” mean? To subject [someone] to aggressive pressure or intimidation… disturb persistently, torment, bother continually, pester, persecute.”

Actor Peter Fonda tweeted for Trump’s 12-year-old son, Baron, to be “ripped from his mother and put in a cage with pedophiles.” And that Homeland Security Secretary Kirstjen Nielsen be put in a cage and whipped.

We need to remember much more than the lessons of kindergarten. Like the words of our founding father, John Adams:

“We have no government armed with power capable of contending with human passions unbridled by morality and religion.  Avarice, ambition, revenge, or gallantry would break the strongest cords of our Constitution as a whale goes through a net.  Our Constitution was made for a moral and religious people.  It is wholly inadequate to the government of any other.”

To be continued on Friday…

But meanwhile, what say you?