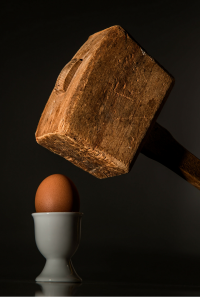 The last two Kingdom PERSECUTION posts concern the same issue from different perspectives and geographies. At the very least, the preponderance of current news surrounding this issue suggests it is not only relevant, it is timely and not-at-all isolated.

Fear-mongering can produce unintended consequences. Like people discounting the messenger without giving the message its due. Which came first, after all: The mallet? Or the egg?

Take the recent media furor over California Assembly Bill 2943 — a proposed law passed by the Assembly and now before the California Senate. The bill relates to “gay conversion therapy.”

But according to Travis Allen, Republican gubernatorial candidate, it would effectively ban the sale of Christian books, including the Bible. Allen asserted this position while on One America News Network.

His interview clip was viewed on Facebook 1.4 million times in less than 24 hours. Triggering multiple inquiries to Snopes.com about its veracity.  https://www.snopes.com/fact-check/california-bible-ban/

Snopes’ analysis debunked the claim, stating the bill does not mention the Bible, Christianity, or any religion at all. And although the bill enhances California’s already existing probition on “sexual orientation change efforts” (SOCE), it does not seek to outlaw all religious or moral instruction regarding sexuality and sexual orientation.  https://www.snopes.com/fact-check/california-bible-ban/

Then why would the California Family Council list more than twenty highly-reputable organizations and individuals who have made legal, testimonial and other compelling submissions in opposition to the passage of AB 2943?  http://www.californiafamily.org/oppose-ca-ab-2943-ab-1779-and-ab-2119-reference-materials/

What does the bill actually say?

“Contemporary science recognizes that being lesbian, gay, bisexual and transgender is part of the natural spectrum of human identity and is not a disease, disorder or illness” and “sexual orientation change efforts… can pose critical health risks” to those affected.

“Sexual orientation change efforts [are defined as] any practices that seek to change an individual’s sexual orientation… [including] efforts to change behaviors or gender expressions, or to eliminate or reduce sexual or romantic attractions or feelings toward individuals of the same sex.”

Going beyond changing the orientation, to changing any behaviors or gender expressions? David French, in National Review, ponders potential violations…

A sexually-active gay seeking counseling to become celibate? Unlawful. Efforts by parents to persist in encouraging their child’s biological gender if they exhibit symptoms of gender dysphoria (which most children do)? Unlawful.   https://www.nationalreview.com/corner/california-bill-threatens-christian-books-and-booksellers/

What would the bill actually do?

Make “advertising, offering to engage in, or engaging in sexual orientation change efforts with an individual an unlawful business practice.”

What’s the message here to Christian pastors and/or counselors who seek to understand this issue through the lens of God’s Word… and find solutions through the delivering power of God’s Son, who can truly set people free?

This blog may have raised questions for you. If you’d like to connect, engage, or get further help from me, you can…  EMAIL me at [email protected]; CALL me at 863-446-1660; or request a complimentary initial CONSULT with me at http://tinyurl.com/DianaFurr.