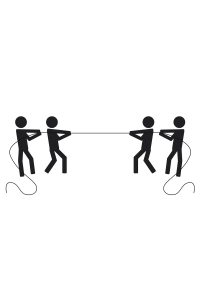 Then, in 2007, eHarmony encountered Disharmony.

A women in San Mateo County decided to try eHarmony, intrigued by its claim to be able to “deliver matches that have the foundation of compatibility based on a lifetime of joy.” Unfortunately, the entry portal did not give her the option she wanted: “Woman seeking woman.”

She complained to the company without satisfaction… and then sued. Accusing eHarmony of violating a California law that prohibits businesses from discriminating based on sexual orientation. eHarmony disputed this. Not only was the company not excluding gays and lesbians, but a legitimate business purpose existed for their current service offerings.

The California law prohibited only arbitrary discrimination that lacked a legitimate business purpose. eHarmony’s patented Compatibility Matching System was drawn entirely from a clinical psychiatrist’s observations of opposite-sex marriages. To apply it to same-sex couples without any corresponding scientific research would delegitimize the very basis of eHarmony’s patented approach.

eHarmony’s attorney contended that, in this case, a discrimination claim against same-sex partners was comparable to a suit against a Japanese restaurant “for discriminating against people who like French food.”

Subsequent (and similar) lawsuits were brought by other individuals. Ultimately, without acknowledging any liability on the part of the company or its founder, eHarmony decided to settle rather than litigate.

In California, eHarmony agreed to allow access to both its gay and straight dating sites with a single subscription, to display its gay dating services more prominently, and to establish a settlement fund to pay people who could show they were harmed by the company’s policies (a fund in the amount of $500,000, plus $1.5 million in court costs and attorneys’ fees).   https://www.cbsnews.com/news/eharmony-settles-gay-discrimination-suit/

eHarmony’s founder (Dr. Neil Clark Warren) apparently concluded the paths of his personal and business witness would have to diverge. In an interview with Dr. James Dobson, Dr. Warren said, “Cities like San Francisco, Chicago or New York  — they could shut us down so fast. We don’t want to make enemies out of them. But at the same time, I take a real strong stand against same-sex marriage, anywhere that I can comment on it.”    https://web.archive.org/web/20040225142236/http://www.family.org/married/youngcouples/a0021741.cfm

Being a marketplace witness for Christ is not for the faint-of-heart. That’s why seeking His Direction, hearing His Voice, and following His Lead are all so crucial.

So… what do you think?

When does compromise expand or sabotauge our opportunity to reach people for Christ?