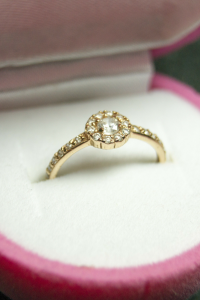 What single women doesn’t catch her breath when the man of her dreams — the real man, the love of her life — pulls a small velvet box out of his pocket in a super-romantic moment?  🙂

Actually, diamonds aren’t (like that old slogan said), “A girl’s best friend.” Her real best friend is the man she’s marrying, when she accepts that diamond… Amen?

Next to You, of course, Lord. What other friend would ever go to the lengths You have gone for us?

“Greater love has no one than this: to lay down one’s life for one’s friends. You are My friends, if you do what I command… I have called you friends for everything that I learned from My Father I have made known to you.”  (John 15:13-15)

And how could I not catch my breath, Lord, when I saw that unexpected small package just outside my office window the other day? That precious fawn, following closely behind its mother, just feet away? 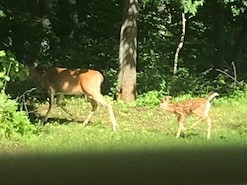 Shades of Bambi as a little one! So cute! So sweet! So close I could almost touch him…  🙂

And how could I not catch my breath, Lord, when I felt that unexpected small package in the fold of my ear lobe? Or the earlier one, on my ankle? 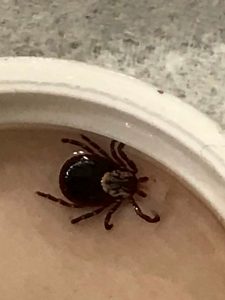 Ticks that had made it through our almost daily Tick Check. A necessary ritual here in the mountains.

Thankfully — by Your Grace, Lord, and my husband’s steady hand — both ticks were soon removed using alcohol and tweezers. One was too small to photograph, much less identify.

I’m no expert on the identity and/or perils of these ticks, Lord, but You are. And I’m trusting in Your Grace to spare me from any ill effects. But it did get me thinking…

Hence, the title of this blog: The Promise and Perils of Small Packages.

Small packages can, surprisingly, yield the Biggest Promises… and, sometimes, the Biggest Perils. What small things suck the life out of us? How do we grow that mustard-seed faith that moves mountains?

David was a barely more than a boy; a midget compared to Goliath. But he had the courage of a lion. And he took that giant down with one small stone.

You came the first time, Lord, as a tiny baby. A midget compared to the powers of this world. Is that why we should never judge a book by its cover?

You were (and are!) The Lion of Judah. With the courage of David times infinity! And when You come again, You’ll take down every giant. Not with any stone, large or small…

… but with a single Word.

The Promises and Perils of Small Packages. Promises of God, for the people of God. For everyone else? Peril times infinity!