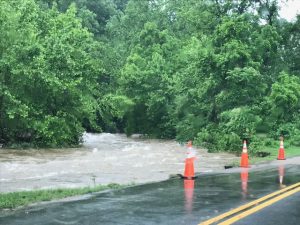 If ever there was a time for higher ground, the time is NOW.

We’ve had way too much rain in the last week. As much as 5 inches in as many hours. We’re in the foothills of the Blue Ridge Mountains. Meaning the rain at higher elevations combines with our own.

Like in the above photo. What is normally a beautiful stream to wade and fish, has become a raging river. Raging is an understatement. Not far upstream, two women were swept away in the current.

After church today, I went on reconnaissance. Up and down the river. To see how bad it was, while staying out of harm’s way. That’s when I spotted the scene above, Lord. And heard Your prompting almost immediately.

To snap this photo. And to write about its meaning.

If ever there was a time for higher ground, the time is NOW.

The rain hasn’t stopped here. It is forecast to continue through today, tonight and the next two days. Meaning, this water is destined to rise even higher.

Look closely, and it’s clear the roadway has already started to give way. What will be left if the flood waters rise higher still?

But what’s Your message in this, Lord? Punctuation helps. How this message changes profoundly with the addition of just two capital letters.

If ever there was a time for Higher Ground, the time is NOW.

The Truth of this seems inescapable when I look around, Lord. Does anyone else see it?

Headlines blaring at us, revealing much about the days we are in. To those with ears to hear. Days when restlessness and lawlessness seem, at times, to rule. When the flow of our culture seems to be sweeping away so many of the values and principles You hold dear.

Days when so many seem hell-bent (no pun intended) on taking The Easy Way Out. Going along to get along. Treasuring the message of that old folk song — the Sound of Silence — when Paths of Righteousness scream to be noticed and followed.

How long, Lord, before those Paths erode so much they are no longer passable?

“The Lord is my Shepherd, I shall not want. He makes me lie down in green pastures, He leads me beside still waters, He restores my soul.”  (Psalm 23)

But it isn’t only by still waters that You lead us… is it, Lord? It is also through the roughest of white waters that threaten to sweep us away to oblivion.

You are the Higher Ground we most need in Life, Lord! Help us turn to You, even now… come what may. That we may be empowered and emboldened to love and lead people to You… now and forever!