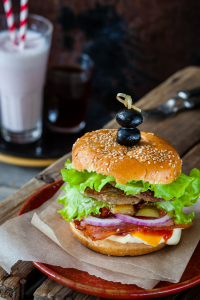 Sometimes it’s almost impossible to learn the Real Story about privately-held companies. They’re not under any compulsion to disclose who they are (or why they do what they do).

Some might call it the Fast Food Upstart. In-N-Out Burger is an American regional chain of fast food restaurants located primarily in the American Southwest and Pacific coast. It began as a drive-through with its own speaker system. http://www.in-n-out.com/history.aspx

Founded in California in 1948 by Harry and Esther Snyder, In-N-Out Burgers’ commitment to fresh high-quality ingredients has built strong loyalty among high profile and anonymous customers. Even gourmet chef Julia Child championed the chain, claiming to know every location from Santa Barbara to San Francisco.  https://en.wikipedia.org/wiki/In-N-Out_Burger

In-N-Out Burgers is one of the few fast food chains in the U.S. to pay its employees more than the government-mandated minimum wage. And its fun, team-oriented corporate culture, although elusive as to most of its H.R. practices, produces enthusiastic employees. https://goodcompaniesgrooms.weebly.com/in-n-out-burger.html

And the Christian connection? In-N-Out Burgers appears on every list I have seen of the top “Christian companies.” In part, because of Bible citations in small print on its packaging — e.g., John 3:16 on the bottom of every cup.

The family behind this family-owned business has experienced plenty of grief. Founder Harry Snyder died at age 63. His 24-year-old son, Rich, then led the company for almost 20 years through a season of rapid growth. But in 1993, he died in a plane crash.  https://en.wikipedia.org/wiki/In-N-Out_Burger

Rich’s brother, Guy, became President. Just 6 years later, he died from an overdose of painkillers. His daughter, Lynsi — only grandchild to Harry and Esther and the company’s majority owner — said her world shattered.

In a rare interview in 2017, as she prepared to lead the company at age 35, Lynsi spoke candidly about her years-long downward spiral attempting to fill the void with drugs, alcohol and men.  http://people.com/celebrity/billionaire-in-n-out-heiress-spiral-marriage/

Secrets were partly the driving force behind the family’s generous support of two causes.  http://www.in-n-out.com/foundations

Esther and her son, Rich, created the In-N-Out Burgers Foundation in 1984 to give children hope. Its sole purpose is to assist children who have been victims of child abuse and prevent others from suffering a similar fate. The Foundation’s website cryptically references Esther was “driven by the family’s own encounter with child abuse.”  https://ino4kids.org/

Lynsi established the Slave2Nothing Foundation in 2016, helping those in our country who are enslaved by any person or substance… empowering them to live free. This effort supports organizations addressing human trafficking and substance abuse.  https://www.slave2nothing.org/about

Hundreds of millions have been raised through donations and corporate-sponsored fundraising activities. In-N-Out Burgers supports all administrative expenses, so 100% of all donations help fund the nonprofits it supports.

Lynsi credits her faith with her own life change. Now, the mother of four leads a private life serving the Los Angeles community with her husband, Sean, through the faith-based Army of Love Foundation they created in 2013.   https://armyoflove.com/about

How have you seen yesterday’s Secrets drive Service today and tomorrow?