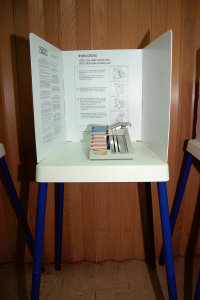 Religious liberty battles are often fought in courtrooms. Where the actions of individuals and/or government officials are brought under the scrutiny of judges charged with interpreting and administering the laws of the land.

Judges are human beings, of course. With their own worldview.

Is their worldview — and, consequently, any judicial opinion — driven by their politics? Their own perception of social justice? Their desire to not just interpret the law, but to make it?

Such are the questions we should all ask when voting to elect or retain judges, even at the local level. Yet how many of us do?

More than one judge throughout our nation in recent years has been accused of (or heralded for) shaping existing laws. To promote an agenda hostile to religious liberty. It’s called judicial activism.

But what about activist legislators who seek to do the same by changing the laws themselves?

Their agenda? Amend the Religious Freedom Restoration Act of 1993 “to protect civil rights and otherwise prevent meaningful harm to third parties, and for other purposes.”   https://www.congress.gov/bill/115th-congress/senate-bill/2918/text

I am not a rocket scientist. But it doesn’t take one to discern the real objective here. It can be seen clearly in the language of the bill itself. It’s called the “Do No Harm Act.” And it asserts…

“It is the sense of Congress that…

… (1) the Religious Freedom Restoration Act of 1993 (RFRA) should not be interpreted to authorize an exemption from generally applicable law that imposes the religious views, habits, or practices of one party upon another;

… (2) the RFRA should not be interpreted to authorize an exemption from generally applicable law that imposes meaningful harm, including dignitary harm [i.e., harm to human dignity], on a third party; and

… (3) the RFRA should not be interpreted to authorize an exemption for one party that permits discrimination against others, including persons who do not belong to the religion or adhere to the beliefs of that party.”   https://www.congress.gov/bill/115th-congress/senate-bill/2918/text

If these bills were to become the law of the land, whose actions would be quashed? Anyone, in any realm of society, who expresses (and/or acts upon) a deeply-held religious conviction contradicting prevailing political correctness?

“It will render the RFRA of 1993 inapplicable to federal law, and the prosecution of people of faith will become commonplace. It will be the start of churches and faith-based organizations being dismantled and ruined by litigation.”   http://www.hannibal.net/opinion/20180704/letter-to-editor-freedom-comes-from-god

What implications do you see?

How will you make your vote count in November?