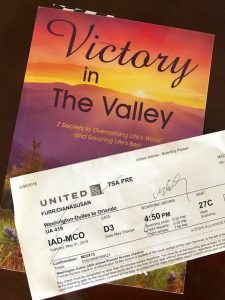 I remember this encounter with You, Lord, like it was yesterday.

It started with my simple, “Hello! How are you?”  The flight attendant as I entered the plane returned her friendly greeting. I went to my seat in the main cabin and we soon took off.

Sometime later, another flight attendant came by with food. Before I ordered, I looked into her eyes said, “How are you today?” She was surprised. Enough to say, “Thank you for asking. People usually don’t.”

We visited for several minutes as she told me about her extended trip — her tiredness, her eagerness to get home — and asked me about my travels, too. She concluded with, “Nice chatting with you.”

Was that when You gave me my assignment, Lord?

You had already prompted me to bring a copy of my book, Victory in The Valley, on the plane with me. I thought I was to leave it in the back pocket of the seat in front of me. Perhaps for a cleaning person?

Suddenly, I knew You had a different plan. I was to take it to the three attendants who were serving us, after they completed their pass through the cabin.

It was another hour before they finished. I went to the back, book in hand, and got their attention. Then spoke the words You gave me.

When I mentioned the title, two looked at each other… with smiles on their faces that seemed to say, “Amazing.” I soon found out why.

They had just met on this particular flight. Yet they had already begun sharing their Valleys with each other. Tears filled their eyes as I spoke…

We won’t all have cancer or some other life-threatening disease. But we all have Valleys. And we all need to have Hope… and to know we can have Victory in our Valleys, even if we’re still in them.

I said You had prompted me to give them my book. It was meant for one of them, or perhaps someone they know and love. It was up to them to decide.

More tears followed… and, at my invitation, hugs. I returned to my seat.

Later, one came by. She said all three were going to read it… and were “fighting over” who would be first. 🙂  She had won.  🙂

But, she hadn’t really won yet… had she, Lord? Her real win would come later that night, at her hotel, when she opened the book’s cover…

… and began to read about You!

One thing was obvious: She didn’t yet know You. But, by Your Grace, she had received a taste of Your Love through our brief encounter. They all had. And now, Lord…

Help them have eyes to see the feast that You truly are!

“I am the Bread of heaven. Whoever comes to Me will never go hungry, and whoever believes in Me will never be thirsty.”  (John 6:35)

We landed and soon parted. But when I left the airport… I was still flying high!  🙂