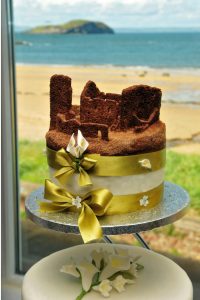 My heart-prompting to be in the U.S. Supreme Court yesterday proved to be unrealistic. I was already planning how to take the Metro and arrive hours early for a first-come, first-serve seat… when I realized the real Deal Breaker.

I had returned to our Florida home from Virginia the week before.   🙁

I checked the Internet this morning for late-breaking news from the history-making case argued there yesterday — Masterpiece Cakeshop v. Colorado Civil Rights Commission. Here are excerpts from a New York Daily News article…

Which trades or occupations can claim speech, artistry or expression for purposes of the First Amendment?

It’s not an easy question. Jack Phillips says the amendment protects his refusal to bake a cake for Charlie Craig and David Mullins’ wedding. Are Phillips’ creations — each custom, and one-of-a-kind — more a standard commodity like chair rentals? Or something more expensive and artistic, like painting an oil portrait of the newlywed couple or composing a song for them?

The conventional split between the Supreme Court’s liberal and conservative wings came through in yesterday’s lively argument. Justice Sonya Sotomayor hammered the baker’s position, while the conservative trio of Samuel Alito, Neil Gorsuch and Chief Justice John Roberts did the same to Colorado’s.

In the middle… is Justice Anthony Kennedy, famous as the author of the Court’s gay rights decisions but also as a strong First Amendment proponent. Kennedy… did not seem to warm to a couple of theories offered on behalf of Phillips, including one from the U.S. Department of Justice that would recognize participation in ceremony as a legal category of its own.

But he did show… unexpected interest in what had been regarded as a side issue… namely… evidence that the Colorado commission, or some of its personnel, had taken a dismissive view of Phillips’ religious scruples (“freedom of religion used to justify discrimination is a despicable piece of rhetoric,” one commissioner had said).

“Tolerance is essential in a free society,” Kennedy pronounced… “And tolerance is most meaningul when it’s mutual. It seems to me that the state in its position here has been neither tolerant nor respectful of Mr. Phillips’ religious beliefs.”

… the theme that the commission acted badly in this particular case might give Kennedy a narrow way to let Phillips off the hook or send the case back without creating any particular carve-out to discrimination laws.

The oral arguments occurred yesterday, but the Justices’ decisions will be made in the coming weeks and months… leading to their ruling in the Spring.

What will it be sweet?  Or bitter? Only the Lord knows.

So please… PRAY — and keep praying — for a God-pleasing outcome… asking for His mercy.

Meanwhile… What do you think? Should Phillips’ custom cake designs (if declined for a same-sex marriage) be protected as First Amendment expressions? Or condemned as discrimination?