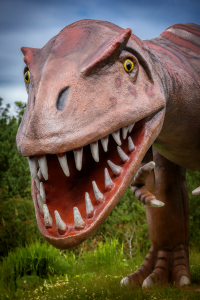 Can anyone of movie-going age honestly say they were not the least bit intrigued by the premise of Jurassic Park, Lord? That dinosaurs could be brought back to life to interact with humans today?

Intrigued, maybe… but not eager. Perish the thought!  🙁  🙂  Certainly makes a thrilling (and lucrative) storyline, though… Amen?

I’ll never forget the hair-raising scene in Movie #1, when two stars are nose-to-nose with a T-Rex. Literally. The Archeologist Hero urgently whispers The T-Rex Defense:

Turns out The T-Rex Defense was true. Good to know, next time I see a live T-Rex. Which hopefully, Lord, will be NEVER!  🙂 Funny, though, how it proved true just days ago, with no T-Rex in sight!

My husband sat on our deck before dusk. Still plenty of light for watching our “pet” hummingbirds at nearby feeders. He shifted slightly in his chair… then FROZE.

Barely 15 feet away was a BLACK BEAR! He had wandered around the corner of our house. Between the two hummingbird feeders.

My husband’s movement froze the bear in his tracks. An adolescent, clearly on edge. Ready to bolt, all 130 pounds of him. Wary. Looking around. Sniffing the air.

My husband embodied The T-Rex Defense. Zero movement. Not even one eye blink. The bear couldn’t see him!  🙂  Regaining his confidence, he swaggered across the yard… past the bird bath… down the driveway… and into the woods.

I learned about this amazing encounter just minutes later. Right after my husband persuaded me to refill the bird feeders. !!!

I’m sure it was safe. He would never knowingly put me in harm’s way… would he, Lord? Still… It felt freaky to be treading where a black bear had been just minutes before.

And I wondered… What would happen, Lord, if the shoe was on the other foot? If the threatening party was the one not moving (i.e., hiding in plain sight)?

Like bears? How many have we passed right by in our woods without realizing it? Presumably LOTS, if this recent close encounter is any indicator.

Or mountain lions? I was jogging once near a residential neighborhood in Utah when one ran across my path, 50 feet ahead! Naively — foolishly — I kept jogging. Past the spot where he disappeared up an embankment.

By Your Grace, Lord, my naivete wasn’t permanent. I’m alive to tell the story! Not so for another female jogger… killed by a mountain lion near the same spot. Just a day or two later.

But there’s another lion who hides in plain sight every day. Hoping we won’t see him. “Your enemy the devil prowls around like a roaring lion looking for someone to devour.’ (1 Peter 5:8b)

Thanks to You, Lord, our solution totally dispells naivete and foolishness. “Be alert… Resist him, standing firm in the faith… And the God of all grace will Himself… make you strong, firm and steadfast.” (1 Peter 5:8a,9-10)

The King of kings Defense wins every time!