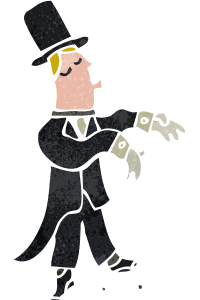 It’s one of our offensive weapons in spiritual warfare. Spirit-led, Spirit-empowered prayer. “And pray in the Spirit on all occasions with all kinds of prayers and requests.”  (Ephesians 6:18)

Sometimes we find prayer in the most unexpected places. Like when it’s built into the infrastructure of one of the world’s most luxurious hotel chains.

Horst founded the Ritz Carlton Hotel Company. His core conviction of the dignity of every person became central to the corporate culture he sought to create.

His passion for excellence was not grounded simply in the now well-known business ethic of exceeding customer expectations. Deeper still was his desire that such excellence would open the door for him to talk about his Christian faith.  As other hotel industry leaders would seek to learn Ritz Carlton’s success secrets, Horst would have the opportunity to talk about people being made in the image of God, the Golden Rule, and his evangelical convictions.

Many leaders have sought to learn from Ritz Carlton. Because under Horst’s leadership, Ritz Carlton grew from four to forty hotels, and won the coveted Malcolm Baldridge National Quality Award twice. Since then, the “special sauce” of Ritz’s culture has been widely publicized and analyzed in places as diverse as business schools and board rooms.

The Ritz’s “Care and Repair Everything” system combines deep housecleaning with immediate room repairs to create the most defect-free rooms in the industry. And every Ritz Carlton employee is empowered to spend up to $2,000 to resolve, to the guest’s satisfaction, any problem encountered during their stay. That’s $2,000 per employee,  per guest, per incident!

I love the simple yet profound explanation Horst gives for his passion for excellence. His real bottom line is this: People will come and study us to learn how we did it… they will peel down the onion, and at the end, they will see a bunch of Christians praying… They will see that [we] have core values… and, hopefully, everything we do is honoring Christ.” (See Faith in the Halls of Power, by D. Michael Lindsay, pages 169–170).

Horst has since founded the ultraluxurious Capella Hotels. His Gold Standard philosophy reflects at its core the Golden Rule. In describing the kind of people he hires and empowers with automony, Horst tells of one night bellman who went to the hospital with a guest (who had appendicitis)… staying there with him all night.   https://www.forbes.com/sites/katiebell/2012/05/03/horst-schulze-on-the-new-frontier-in-luxury-hotels/#1fef68766ef6

Can you imagine the questions such conduct would evoke? And how Horst would answer?

“Always be prepared to give an answer to everyone who asks you to give the reason for the hope that you have.” (1 Peter 3:15)

What does Christ-empowered excellence look like in your vocation or avocation?