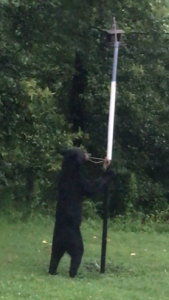 He wasn’t a huge bear… was he, Lord? Big enough to keep me safely inside, to be sure. Not big enough to get The Treasure he clearly desired.

But his size was never the point… was it, Lord? For what You wanted to teach me, any size would do.

The Treasure — aromatic sunflower seeds — hung at the top of our Bear-proof Bird Feeder. Too high for him to reach, at just over ten feet. Suspended from the top of a pole fashioned from three distinct materials — steel, PVC pipe and wood.

“Though one may be overpowered, two can defend themselves. A cord of three strands is not quickly broken.”  (Ecclesiastes 4:12)

By Your Grace, Lord, I captured his would-be thievery on video. Two videos, in fact. He left briefly after his first unsuccessful attempt. But the aroma of that would-be meal was too much for him. He came back for a second (also unsuccessful) try.

Many thumbnails in these videos spoke volumes. I chose the one pictured here because it shows not only how futile his last attempt was, but also how clever.

Or in this case, defeat.

For awhile, I watched in awe. Totally fascinated by this bear’s persistence. His inventiveness. He knew The Treasure he wanted. The nourishment he needed.

It was so close. Yet so far away.

He pushed and pulled on that pole, using his whole body weight. He tried climbing it. Shaking the seeds loose. Even, to my amazement, he tried to untie the cord holding it aloft.

That’s when it hit me. I was looking at this would-be thief at the base of our pole. He was looking up… at The Treasure he could never reach on his own. I watched his persistent, hopeless efforts to make it happen. And I realized…

… I was looking in a mirror.

You hung high on a pole long ago, Lord. The Treasure above all treasures.

I, too, was hungry. Whenever I looked up. Whenever I failed to. Or refused to. I didn’t know what — or Who — The Treasure might be. I just knew it was something — maybe even Someone — far above me.

Try as I might, I could never reach high enough. Somehow, I knew it. So I, too, had been hopeless. Helpless.

In the end — even in The Beginning — You came down… on Your own. The Treasure I wanted. The nourishment I needed. Desperately.  Even before I knew Your Name.

“He has also set eternity in the human heart; yet no one can fathom what God has done from beginning to end.” (Ecclesiastes 3:11)

But You’re teaching me, even now… aren’t You, Lord?