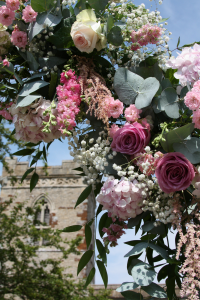 Barronelle Stutzman is a Christian floral designer in Richland, Washington. She never imagined herself as a crusader. Just a 72-year-old grandmother who loves her business and her customers.

She loved working with her longtime friend Rob. He was her loyal customer for a decade. She knew he was in a same-sex relationship, but that didn’t matter. She served everyone.  https://www.washingtonpost.com/posteverything/wp/2015/05/12/im-a-florist-but-i-refused-to-do-flowers-for-my-gay-friends-wedding/?

Until Rob asked her to prepare custom flowers to celebrate his same-sex marriage.  https://www.seattletimes.com/opinion/why-a-good-friend-is-suing-me-the-arlenes-flowers-story/

Barronelle graciously declined because of her commitment to biblical truth about marriage. Rob seemed to accept her decision. He said he understood. She even referred him to several other florists she knew would do a good job for him.

They talked about how he got engaged. They hugged. Then he left. End of story… right? Wrong.

The Washington State Attorney General filed a lawsuit against Barronelle. After he found out what had happened through social media. That’s when the hate letters, phone calls and emails began. And the death threats.  https://www.huffingtonpost.com/2015/03/30/barronelle-stutzman-fined_n_6971122.html

The ACLU sued her, too. With a demand that, if she loses, she must personally pay all of the ACLU attorneys’ fees. Hundreds of thousands of dollars. Maybe more. She could lose everything she owns.    https://www.adflegal.org/detailspages/blog-details/allianceedge/2017/02/16/washington-supreme-court-punishes-barronelle-stutzman.-what-now

Last year, the Washington Supreme Court ruled the state can force Barronelle to create custom floral arrangements to celebrate same-sex ceremonies. The Alliance Defending Freedom has been by her side from the start. All the way to the U.S. Supreme Court.  https://www.cbsnews.com/news/washington-supreme-court-florist-same-sex-wedding-case/

In just four weeks (or less), the nation’s Highest Court will issue its ruling in the Masterpiece Cakeshop case. A case that will settle the landscape for creative artists of all kinds.

Will they be able to act on their deeply-held religious beliefs? Or will they be forced to provide creative services that violate those beliefs? We will know the answer soon.

Is it really worth the cost, Barronelle? The risk? Here’s what she says:

“Does anyone really believe that a government that gives itself the power to force people to believe (and not believe) things… will only use that power to bend one small-town florist to its will — and then leave everyone else alone?”   (Email sent to Diana Furr by Alliance Defending Freedom, May 30, 2018)

How about you? What do you believe?

Why did this start? Where will it end?