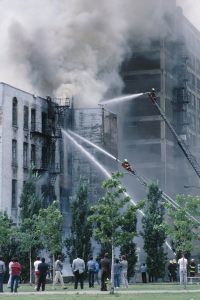 We all remember one or both of our parents exhorting us with this urgent warning. “Don’t play with fire!” We may not have always heeded it… but we certainly heard it. Amen?

Why the warning? Because of the expected consequence. If you play with fire, you’re likely to get burned.

Kelvin Cochran took this warning to heart. He took fire so seriously, he decided at the age of five that he wanted to grow up to be a firefighter.

Kelvin was born into extreme poverty in Shreveport, Louisiana. That’s where he… First became a firefighter. Worked his way up through the ranks. Became Fire Chief in 1999.

It wasn’t all warm fuzzies.

First African-American on the force. Firehouse accommodations designated only for him — bed, plates, forks, spoons. So white firefighters wouldn’t have to use anything he used.

Kelvin was not a spark on damp wood, struggling to ignite. His career caught fire. After serving as Shreveport Fire Chief for nine years, he was appointed Fire Chief of Atlanta in 2008.

Atlanta lobbied him to return. So he did… in 2010. Where he served until 2015… when the City abruptly suspended him without pay.

Then fired him… 30 days later.

Because Kelvin wrote a men’s devotional book, on his own time, for a men’s Bible Study at his church. Elizabeth Baptist Church. And the City did not approve of what he wrote.

Kelvin’s book, “Who Told You That You Were Naked?,” reviewing the state of man since the fall of Adam. Kelvin’s message? Only in Christ can men be rescued from their fallen condition and fulfill their purpose as husbands and fathers.

Kelvin briefly touched on the clear biblical teaching that sex is reserved for marriage between a man and a woman. Which ignited the ire of people seeking to redefine marriage.

Opponents claimed Kelvin should be fired because his thoughts and beliefs did not conform to theirs. The City of Atlanta agreed.

Kelvin was ordered to undergo sensitivity training during his suspension. Though the City’s investigation concluded he never discriminated against anyone, Kelvin was fired.

Fast forward. A 3-year legal battle concluded this week. The wrongful termination lawsuit initiated by Kelvin, arguing that the City’s actions were unconstitutional.

In December, a federal district court struck down Atlanta’s policy requiring government employees to receive permission before engaging in free speech outside of work. Don’t miss that! Can you imagine your local government requiring this of you?

Last week, the City of Atlanta settled with Kelvin. Agreeing to pay him $1.2 million for the harm he suffered. See this moving video with Kelvin’s story. And the Post’s review of the case and settlement.

Freedom Rings for Axed Fire Chief Kelvin Cochran, to the Tune of a Shocking Sum

If the government can fire someone like Chief Kelvin Cochran — with such a stellar history of distinguished service — who else could they target?

Why should this matter to all of us… whether or not we share Kelvin’s faith?