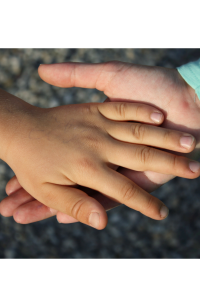 They aren’t famous. I had never even met them before. So why did I grab my camera during our communion service this morning and snap their picture?

Because You told me to, Lord.

It was one of those Urgent Opportunities. A Photo of A Lifetime. Here one moment, gone the next. So I didn’t waste a second when You said, “Right NOW!”

No second guessing. No wondering how it might look to anyone else.

Oh, Lord… If only I were always so obedient to You! So unquestioning. So eager to do whatever You ask me to do, in the very moment You ask.

The instant I saw it — that cherished cameo — I knew why You wanted it photographed. Because the family in question would treasure it. Be inspired by it. Encouraged to press on in the priceless endeavor to which You have called them.

Passing their faith on to their children. Making their love for You contagious to those You have entrusted to their Tender Loving Care.

I love how You’ve orchestrated communion at our church, Lord. We all go forward, to kneel before Your altar. One row of worshippers kneels, another row stands behind them.

Not just standing… but praying. For those directly in front. Connected in body and spirit. One hand resting on the other’s shoulder.

My turn had come and gone. We were nearing the end when I spotted them. A 30-something man standing behind an older, kneeling woman. Reaching his right hand out, placing it on her shoulder.

What I saw next took my breath away.

A little boy, no more than four years old. Sandwiched in between his father and the kneeling woman. Reaching his hand upward. Resting it on the woman’s right shoulder.

Underneath his father’s hand.

I snapped the photo. By Your grace, Lord. A photo that family will cherish… forever. How would I ever find them, among the hundreds of worshippers present today?

Minutes later, there they were. In the balcony. I signaled to the mom. Soon, we were together. And I showed them The Photo.

I tried to describe how deeply it had touched me. My words caught in my throat. Tears filled my eyes. In that moment, I wondered: Have I ever seen anything more beautiful?

Young parents, passing their faith on to their child. I hadn’t experienced this myself. I was 36 years old when I fell head-over-heels for You, Lord. Maybe that’s why this faith drama touched me so deeply.

I texted the photo to the mom. She said their little boy gave all his money to the offering this morning. He had worked hard for it, but wanted Jesus to have it.

I still don’t know their names. But I will treasure their photo… forever.

Thanks to You, Lord.