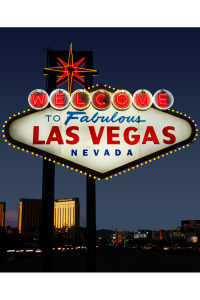 Sometimes what happens in Vegas can’t stay there. Because the whole world needs to hear about it!

Enter Lowell “Bud” Paxson. From DJ to small radio station owner. One of his advertisers, short on cash, paid his invoice with 118 electric can openers.

Though “rich” in product, Bud couldn’t make payroll the next day. His desperate brain gave birth. Perhaps because Necessity is The Mother of Invention?

Bud broke into his station’s live programming. What came out of his mouth on air changed not only his own life, but the lives of hundreds of millions of people. By changing their whole approach to shopping.

Bud told listeners if they paid in cash and came to the station, they could buy a $30 can opener for $10. All 118 can openers sold in one hour.

Bud made his payroll. The rest is history.

After selling his station, he launched a cable TV show. Not just any show, but a three-hour version of the radio format. Called Home Shopping Club.  https://www.encyclopedia.com/social-sciences-and-law/economics-business-and-labor/businesses-and-occupations/home-shopping

In 1985, Home Shopping Club expanded nationally as Home Shopping Network. Its growth was extraordinary. In 1986, HSN went public. Bud’s global travel kept him away from home 260 days a year.

But the upward trend in Bud’s business mirrored the downward trend in his personal life. His wife announced on Christmas Day (1986) she was leaving him for another man. Bud described this lowest point in his life:

“I was absolutely and completely bankrupt, I was a millionaire, yet all of my success was worthless because I had lost my wife and wasn’t close to my kids.”   http://www.giantsforgod.com/bud-paxson-home-shopping-network/

He had planned a vacation in Las Vegas — his Christmas gift to his family. Despite his wife’s departure, he and his children kids went. By New Year’s Eve, Bud was unable to sleep. At 4 AM, he felt an urge to do something he hadn’t done since he was a child in Sunday school.

He found one in the hotel nightstand… and, soon, gave his heart to Jesus. His hunger for the Bible became insatiable. A local pastor helped him begin to understand how to live a committed Christian life.  http://www.giantsforgod.com/bud-paxson-home-shopping-network/

His business practices changed. HSN flourished, hitting $1 billion annual revenues (1990). Bud parted ways with his partner, who shared neither his faith nor his vision for HSN’s future.

Bud’s share of HSN’s sale (1996) was $118 million. Instead of retiring, he bought local TV stations and created the network, PAX TV.  https://en.wikipedia.org/wiki/Bud_Paxson

After revolutionizing shopping and blazing Christian trails in television, Bud died in 2015.    https://www.bostonglobe.com/metro/obituaries/2015/01/19/lowell-paxson-home-shopping-network-founder-dies/nKHGaDJBGuYRmFGgwD2fRO/story.html

A Jackpot worth sharing?