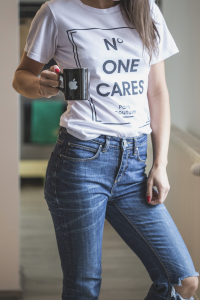 The Kentucky Supreme Court could rule on this case any day.

Hands On Originals, founded in 1985, is a t-shirt printing company in Lexington, Kentucky. Blaine Adamson, a key designer, became owner/partner in 2008. The company was bleeding red, over $500,000 in debt.

Blaine cried out to God one sleepless December night. He’d done everything he could. Tried every marketing strategy he knew. Without God’s help, the company would fold.

On January 1, they were hit with orders. Had one of their best years ever. Business continued to boom. It was like God had turned on His faucet. In December 2011, Blaine paid off all of the company’s debts.

Unfortunately, 2012 was not a Happy New Year.

The Gay and Lesbian Services Organization of Lexington (GLSO) asked Blaine to print custom t-shirts for a gay pride festival. Blaine respectfully declined. The message conflicted with his conscience.

He offered to connect GLSO with another printer who would produce the t-shirts at the same competitive price. Instead, the GLSO filed a discrimination complaint with Lexington’s Human Rights Commission.

GLSO’s Board President also sought to “make people aware of the situation, so they [could] make an informed decision about whether they want to buy from them.”  A “Boycott Hands On Originals” Facebook page was created shortly thereafter.

Yet public support also emerged. From, perhaps, the most unlikely place. From LGBT-owned businesses, such as BMP T-shirts.  After reading about Blaine’s predicament, BMP’s two founders were interviewed on Glenn Beck’s show.

“I know how hard it is to build a business… It’s very personal, .. if that were to happen to us I couldn’t create or print anti-gay T-shirts, I could see it from his side. I really felt for him.”  Kathy Trautvetter

“We feel this really isn’t a gay or straight issue, this is a human issue. No one… should be forced to do something against what they believe in. It’s as simple as that.”  Diane DiGeloromo

Hands On Originals won in the lower and appellate courts. What will the Kentucky Supreme Court rule? Without God’s help, this company could still fold. Yet Blaine’s storm also has silver linings.

“Having [my children] really dig in and ask: Do I really believe what this says? Do I really want to walk this out the rest of my life? Is this really a God I can trust?…”

Blaine says “We should never fear doing the right thing or taking a stand for Him because, wherever God has us, He has us.”